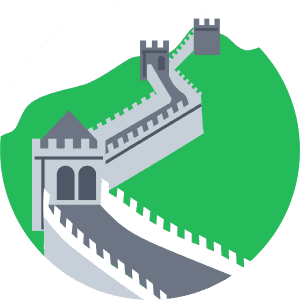 The Great Wall is one of the new 7 wonders of the world because it is the longest human-made structure in the world.

The length of this architectural masterpiece is estimated to be 8,850 km, with width variations from 6.5 meters at the base, and 5.8 meters at the top. The height of the wall varies from 8 meters to 10 meters, with the highest point located in Beijing at 1,534 meters above sea level.

The Chinese government granted permission to the producers of “The Karate Kid” to film on location at the Great Wall. The movie was a tribute in some ways to the enormous size and beauty of this ancient structure. Beyond Jackie Chan and Jade Smith working on a movie there, many other famous people have visited the Great Wall of China.

The list of well-known people to visit one of the new 7 wonders of the world can be considered extraordinary. Nelson Mandela, Mikhail Gorbachev, Barrack Obama, Ronald Reagan, and a host of other famous people have spent time visiting this amazing structure from history.

Best Locations of the Wall to Visit

Many popular tourist locations exist around the wall. One favorite area is called Mutianyu, 73 kilometers northeast of Beijing. There are 22 watchtowers along this area. Access to the area is easy with a cable lift provided.

The Badaling area of the Great Wall was the first part opened by the Chinese government to the general public. American President Richard Nixon visited the area in 1972. It features 19 towers and follows the mountaintop peaks. The area has attracted more than 100 million tourists and is the most popular area of the Great wall to visit.

The first sections were built 221 – 206 BC and estimated that the last work completed on the wall was in the sixteenth century AD. Although work on the wall lasted over many decades and centuries, it was an ongoing endeavor.

Interesting Facts About the Great Wall

Numerous battles have been fought along the Great Wall of China through the years. The 1938 Sino-Japanese war still shows proof with bullet holes visible on the wall. Many died during these wars through the Great Wall’s history.

The wall has been called the longest cemetery on Earth from the fact that many people died from harsh weather and the toil of working on this remarkable man-made structure. Cruel working conditions considered to modern society’s standards were responsible for so many of the deaths. The invention of the wheelbarrow by the Chinese was used extensively in the construction of the Great Wall of China.

People around the world can visit the Great Wall of China in Beijing at many various locations. The Badaling, Mutianyu, Gubeikou, Jinshanling, Simatai, Huangyaguan, Jiankou, and Juyongguan sections offer day tours to visitors.

Sightseers can stand in awe of being one with a part of the history of China. Hikers and trekkers will enjoy walking through sections of the Great Wall. Taking the zip line is the easiest way to view the structure. Tourists that make the decision to go for a visit to the Great Wall should be warned that some sections of the wall are steep for a day walk. Over 10,000 visitors per day travel to Badaling just outside Beijing making it one of the popular tourist attractions in the world.

Have you ever think about The Christ Redeemer Statue in Rio de Janeiro? Or would you like to visit this amazing statue one day? A lot of people around the world are enchanted by this...